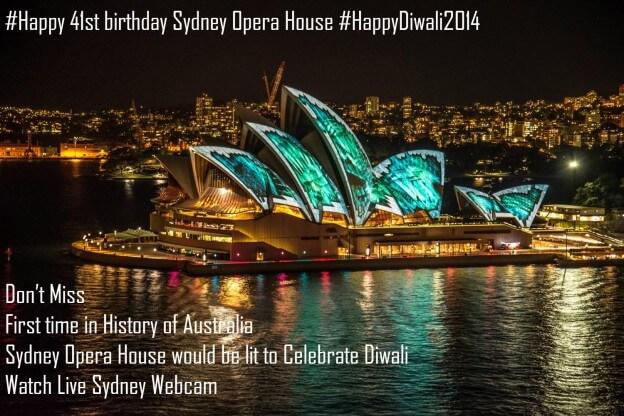 Its Celebration time in Australia for Indian community as they celebrate Diwali 2014 ‘The festival of lights, which coincidentally falls on the 41st birthday week of Sydney Opera House.

Joern Utzon’s famous creation ‘Sydney Opera House’is instantly recognised by millions worldwide as an Australian cultural icon and for the first time in history of Australia it would be lit to celebrate Diwali.

The Sydney Opera House will be lit up just after 8pm for one night only until midnight on Tuesday 21 October with the support of the NSW Government.

If you are in Sydney tomorrow don’t miss this ionic display of lights to Celebrate ‘Festival of lights Diwali.

For people around Australia and India don’t despair as Sydney has some of the best live webcam imagery available.Click ‘Sydney Opera House’ tomorrow between to view the display of light.